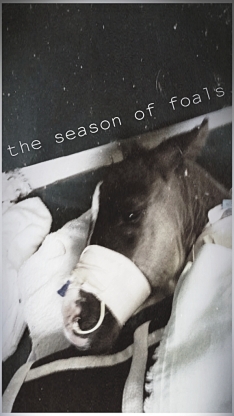 At 9:45 in the evening, I received a text from the interns at the equine ICU office that said something along the lines of: Any way you can help with overnight treatments? You don’t have to stay for all the shit.

Mental auto-correct that they meant shift, not shit, considering the fact it was from a work-phone. It is a 3-4 hour drive from my parents’ house to the veterinary hospital, depending on how colossal the traffic is. After growing up in small towns (less than <2,500 people) and going to school in college towns, I’ve been spoiled by the kind of traffic that only causes a 5 minute fluctuation in commute time. I was already tired of the metropolitan abyss of tail-lights before I even made the first drive north. City-life will always be something I hold an aversion to.

After letting the intern know I’d be at the hospital by 1 AM, the next text I got was almost worth the night I didn’t know I was about to have. “You’re the best.” I logged away the warm feeling that accompanies a compliment. I’ll need that for a rainy day. Having already packed my bags for the impending week of my externship, it took me less than 30 minutes to be out the door. Even more impressive, the scant traffic allowed for a record commute time of 2.5 hours. With every car I passed, green light I made and route maneuver I picked, I felt a more distinguished sense of importance. I was needed, and that’s an important feeling to have affirmed in the work-place. My externship has been going well over the past two weeks. I was participating in cases, assisting with treatments and patient work-ups, practicing my client communication skills and for lack of a better phrase, owning it.

Of the many mysteries of this hospital, one enigma remained the overnight shift. Because of a swing shift, I never met the overnight crew. I assumed it was 2-3 licensed technicians who perform nightly treatments and triage emergency cases, calling to update the interns and in dire circumstances, contact the principal hospital veterinarians. Reality would have it that overnight treatments and triage are performed by a single veterinary assistant, who more-or-less makes it through the night in frazzled yet successful manner. I went to the technician’s area, which serves as a hub for treatment activity during the day. I introduced myself to Sandy, the overnight large animal veterinary assistant. Like an audio recording sped up to x4, the speed and pitch at which she spoke would’ve put an auctioneer to shame. At some points, I had to have her re-round me on cases because apparently our language barrier was due to my lack of adrenaline and cortisol surges. She flew through an endless sea of clipboards and charts.

In the last 6 hours, the hospital went from having two colics in ICU to having 6 mare and foal pairs in ICU. Since there are only 3 ICU stalls in hospital, 2 ICU isolation stalls, and 4 ICU barn stalls…this meant patients were scattered across the equine compound.

The cases included three failure of passive transfers, one foal with severely contracted tendons, one “ADR” and one case of diarrhea. All of the foals were under a week of age. We decided to divide and conquer… I took two FPTs, one colic case and the foal with the contracted tendons.

Fortunately, CT’s owners had milked the dam out and bottle-fed him up until this evening. They were confident that he had received a sufficient amount of colostrum, but were not confident they could keep up with the feedings every 2 hours as recommended. To complicate things, the dam had severe laminitis and took to sternal recumbency every couple hours. We rigged up ice-anklets for her to provide some temporary relief, but ultimately the owners declined any further treatment.

Every two hours I milked out the mare and fed the foal with a bottle. I milked the dam out and fed CT every 2 hours, took his TPR (temp, heart rate, respiratory rate) every 3 hours and performing passive range of motion every 4 hours. He was also on tetracycline. With an initial CBC and chemistry that were well within what we considered normal, we also ran serial glucose and lactate levels. His IgG snap test had been >800 mg/dL upon arrival, so we were confident in his passive transfer status. No need to repeat the IgG at this point. His 4 AM PCV, total protein, BUN, glucose, lactate and repeat CBC were within normal limits.

Throughout the night, CT was a champ. With bilateral bandages on his pelvic limbs, he was more inclined to rest in lateral and sternal recumbancy. A great appetite, systemically healthy appearance and consistently BAR (bright alert and responsive) status gave him a good prognosis throughout the night. In the morning, his bandages would be changed and possible surgical corrections would be discussed with the owners.

Jude was presented to the hospital after becoming increasingly lethargic since his birth 3 days prior. His rectal temperature was 103.8 degrees Fahrenheit with a heart rate of 120 and respiratory rate of 40. His physical exam was fairly normal except for some bilateral increased ventral lung sounds. An IgG snap test had been performed the night before by a referring veterinarian, and with an IgG of <400 mg/dL, the veterinarian recommended Jude be taken to the hospital immediately for further treatment and continuous monitoring.

<400 mg/dL constitutes a failure of sufficient acquisition of maternal antibodies. The crucial part of foaling is that foals receive maternal antibodies in the colostrum of initial lactation. Without these antibodies, the foal has a limited immune competancy.

>800 mg/dl is considered “passing.” This means the foal received an adequate amount of IgG  (antibodies) from consuming the dam’s colostrum. The IgG Snap Test needs to reveal >800 mg/dL in the first 12 hours of birth. After 12 hours, the foal’s ability to absorb these essential antibodies becomes increasingly less and less until the intestinal wall no longer absorbs IgG. In cases where IgG is less than 800 mg/dL, plasma transfusions or colostrum (if within the appropriate age window) are the primary methods of treatment.

Jude received his first plasma transfusion immediately upon arrival using a Blood administration set equipped with a 150 um filter. The plasma is a hyperimmune plasma harvested from donor horses vaccinated against pathogens that frequently cause neonatal sepsis.

He received 1 liter of plasma, which we hoped would raise his serum IgG levels to >800 mg/dL. This didn’t happen, so he was given two consecutive liters of plasma four hours apart. His IgG levels remained between 400 and 800 mg/dL. Realistically, he should’ve been between 1,200 and 1,600 at this time. Jude’s low IgG levels after these transfusions were not indicative of a good prognosis. In fact, his temperature was increasing throughout the night and at 6 AM the next morning, he was fairly unresponsive. After his owners came and visited, the combination of a poor prognosis and financial limitations led to the decision for euthanasia.

Jude’s euthanasia in the morning marked the end of a long overnight shift, fraught with stress and anxiety. Although we weren’t able to save Jude and our hearts go out to the foal and his owners, I am relieved to say that the rest of the patients were cared for overnight ended up making “foal” recoveries.

And no, I’ve never been good at puns.

Follow the 4th Year of Vet School on WordPress.com

Bringing Science to the Pets' Life

Tuggeranong Veterinary Hospital
Thoughts from the end of the world.

Motherhood in a pandemic.

A Natural Lifestyle and Wildlife Blog